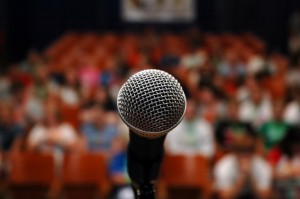 Public speaking in front of an audience, large or small, is often anxiety-provoking for individuals with social anxiety disorder.

Social phobia, also called social anxiety, is a disorder characterized by overwhelming anxiety and excessive self-consciousness in everyday social situations. People with social phobia have a persistent, intense, and chronic fear of being watched and judged by others and of being embarrassed or humiliated by their own actions. Their fear may be so severe that it interferes with work or school – and other ordinary activities. While many people with social phobia recognize that their fear of being around people may be excessive or unreasonable, they are unable to overcome it. They often worry for days or weeks in advance of a dreaded situation.

Social phobia can be limited to only one type of situation – such as fear of speaking in formal or informal situations, or eating or drinking in front of others – or, in its most severe form, may be so broad that a person experiences symptoms almost anytime they are around other people. Social phobia can be very debilitating – it may even keep people from going to work or school on some days. Many people with this illness have a hard time making and keeping friends.

Physical symptoms often accompany the intense anxiety of social phobia and include blushing, profuse sweating, trembling, and other symptoms of anxiety, including difficulty talking and nausea or other stomach discomfort. These visible symptoms heighten the fear of disapproval and the symptoms themselves can become an additional focus of fear. Fear of symptoms can create a vicious cycle: as people with social phobia worry about experiencing the symptoms, the greater their chances of developing the symptoms.

**We are currently conducting a medication-based research study on social anxiety. If you are interested, click here to learn more.

How Common Is Social Phobia?

Animal studies are adding to the evidence that suggests social phobia can be inherited. In fact, researchers supported by the National Institute of Mental Health (NIMH) recently identified the site of a gene in mice that affects learned fearfulness.

One line of research is investigating a biochemical basis for the disorder. Scientists are exploring the idea that heightened sensitivity to disapproval may be physiologically or hormonally based.

Other researchers are investigating the environment’s influence on the development of social phobia. People with social phobia may acquire their fear from observing the behaviour and consequences of others, a process called observational learning or social modeling.

What Treatments Are Available for Social Phobia?

Research supported by NIMH and by industry has shown that there are two effective forms of treatment available for social phobia: certain medications and a specific form of short-term psychotherapy called cognitive-behavioural therapy. Medications include antidepressants such as selective serotonin reuptake inhibitors (SSRIs) and monoamine oxidase inhibitors (MAOIs), as well as drugs known as high-potency Benzodiazepines. Some people with a form of social phobia called performance phobia have been helped by beta-blockers, which are more commonly used to control high blood pressure.

Cognitive-behaviour therapy is also very useful in treating social phobia. The central component of this treatment is exposure therapy, which involves helping patients gradually become more comfortable with situations that frighten them. The exposure process often involves three stages. The first involves introducing people to the feared situation. The second level is to increase the risk for disapproval in that situation so people build confidence that they can handle rejection or criticism. The third stage involves teaching people techniques to cope with disapproval. In this stage, people imagine their worst fear and are encouraged to develop constructive responses to their fear and perceived disapproval.

Cognitive-behaviour therapy for social phobia also includes anxiety management training – for example, teaching people techniques such as deep breathing to control their levels of anxiety. Another important aspect of treatment is called cognitive restructuring, which involves helping individuals identify their misjudgements and develop more realistic expectations of the likelihood of danger in social situations.

Supportive therapy such as group therapy, or couples or family therapy to educate significant others about the disorder, is also helpful. Sometimes people with social phobia also benefit from social skills training.

What Other Illnesses Co-Occur With Social Phobia?